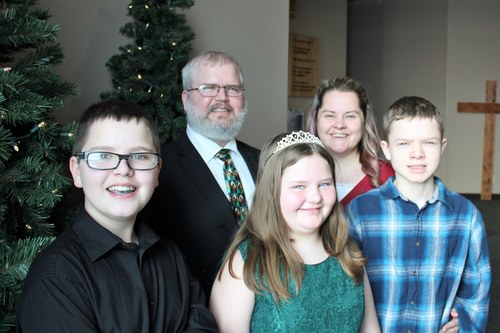 Pastor Kenny graduated high school in 2001 from Long Prairie MN.  He started working for a local meat processing plant right away.  It didn't take Kenny long to realize that this wasn't for him and he bounced around from job to job for a couple of years.

In 2003 he felt a calling on his life and started purusing his credentialing through Berean School of the Bible, offered on-line through Global University.  He worked with Pastor Mike Broberg from Casino Assembly of God, Pillager MN, where he soon fell in love with and married his daughter, Angie.In 2005 he took a job as a part time Children's Pastor in  Morris, MN.  While working at the church he also worked full time for Superior Industries where he worked his way from shop assembly to inside sales.  In 2010 Pastor Kenny received his certificate of ministry with the Assemblies of God.

Pastor Amos reached out to him in July 2012 and Pastor Kenny came on staff August 2012.

In April 2013 Pastor Kenny upgraded from a certified pastor to licensed pastor. Finally in 2015 Pastor Kenny has again upgraded to become an Ordained Minister with the Assemblies of God

Subscribe to receive email updates with the latest news.